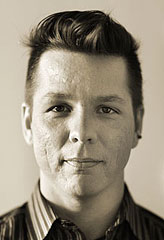 I moved to San Francisco in the Winter of 1997. It was the dot com boom and an El Nino year. I couldn’t find a job anywhere. The only company that would hire me was Professional Messenger, as a bike messenger. I was the worst bike messenger ever. I was slow, didn’t know the city and lost track of packages.

I had started off way ahead of the crowd, graduating high school early to attend New College of the University of South Florida in Sarasota, FL. There I excelled in Chemistry;  it was like a second language to me. I happily bumbled along in school until I realized that I was going to be locked under fluorescent lights and have only socially awkward research scientists as friends. Disillusioned with my goals, I left college a couple of semesters short of a BA.

Like many people, I spent my early 20’s wondering when I’d find my purpose. On February 27, 1998, after only three months in my new city, I was riding my bicycle into my bicycle messenger job when I was suddenly hit by a car. It slammed into my right side and sent me flying to the ground in front of it.

That day began my tour of doctors and specialists, beginning with the Emergency Room. My right wrist and shoulder and my neck and upper back were severely injured. Luckily I did not yet know that I would spend the next 2 ½ years out of work from my injuries.

I dutifully went to appointments at the hospital and orthopedic surgeons offices. I was in so much pain that I couldn’t sit up more than a couple of hours a day. Every doctor did a series of tests and every doctor sent me home with the same solution, more pain pills.

By May I was at my wit’s end. I had turned into a zombie with my daily rituals consisting of popping pain pills and watching daytime television. I was tired of the routine, and a close friend recommended that I try Acupuncture. I didn’t know anything about it and had no idea if it would work, but I was desperate. I decided to quit the pills and give it a try.

I went to a student clinic (not recommended) and only went once per week (also not recommended). But despite my clinician’s lack of experience and the insufficient frequency, I was still in less pain than I had been taking Vicoden every day. My pain decreased enough for me to sleep at night, which felt like a miracle at the time.

I had some serious structural injuries (Acupuncture fixes function not structure), so I truly needed some surgical repair. After failing every attempt of a conservative route of physical therapy, I was scheduled for shoulder and wrist surgery in 1999.

My wrist surgery was first and afterwards my hand swelled up like a big, purple paw. It didn’t look like a hand at all, and when I touched it the sensation was dull and far away. I went to my Acupuncturist the day after the surgery. They did some moxa on it (a warming technique where the Acupuncturist holds a cigar-like stick of herbs close to certain points) and stuck some little needles in between my fingers and in my arms and legs. They let me rest, and I fell asleep.

Thirty minutes later my Acupuncturist returned to remove the needles. I looked at my hand and was amazed to discover that it had returned to normal—normal color, normal temperature and I could feel when I touched it. That was the moment that I realized something real was happening. This was not placebo effect or wishful thinking or psychic healing. The very real blood and fluid that had been stuck in my hand had moved out of my hand in the span of thirty minutes. I had to find out what this was!

After my chemistry experience, I resolved to move slowly. First I spent a year studying Shiatsu massage; it follows some of the same theory as Acupuncture. Then I spent two years volunteering at an Acupuncture clinic while practicing massage. It was only after seeing Acupuncture in action, meeting patients, watching the clinicians and seeing people actually get better that I decided to pursue this as a career.

I immediately launched into what would be 5 years of non-stop school, one to finish my BA and four (year –round, no Summers off) to get my medical degree in Traditional Chinese Medicine.  I found mentors like Dr. Ai-De Men, who is a genius at Internal Medicine (this is med speak for being a specialist at diagnosis, so you end up getting all the tough cases) and Gynecology (mostly infertility and hormone imbalances). I also had the pleasure of doing two rounds of Internship at California Pacific Medical Center on the rehabilitation floor for neuromuscular problems (mostly stroke and spinal cord injury). This was probably the most instructive piece of my training when it comes to the power of Acupuncture. I literally saw a patient go from not being able to pick up a quarter before the treatment to easily grasping and holding it after the treatment–no small feat after a stroke. Again, these were real results, not imaginary, not psychic, not energy balancing.

After a couple of years in practice I was good enough to see my weaknesses. When it came to anxiety and depression I was only getting temporary results, and when it came to pain the results took a few weeks to materialize, leaving my patients to suffer in the mean time. So I sought out solutions.

The first came in the form of a seminar with Julia Ross, best-selling author of The Mood Cure and The Diet Cure. The seminar was on Neuro-nutrient Therapy (also called Amino Acid Therapy). I discovered that I could nourish people’s brains, so they wouldn’t suffer with mood disorders any more—without drugs and without side-effects. I was sold and spent the next fourteen months getting certified as a specialist.

Next I was off to the clinic of Robert Doane, EMP who runs the country’s busiest Acupuncture clinic up in Washington State, and is also an exceptionally talented doctor. He introduced me to two life-changing techniques, Jimmy Chang style pulse taking and Dr. Tan Balance Method for pain. I immediately implemented these techniques in my clinic and my results shot through the roof.

The beauty of medicine is that it is a practice—I will never be done learning, and I will never know everything. For someone like me who loves learning, this is hugely valuable. I love a challenge and I’m sure the challenge will never run out. And there is nothing more satisfying to me than watching patients get better. To see patients who have lost all hope of returning to health instead turn their lives around in a few short weeks is absolutely amazing. I feel blessed every day for that moment the car hit me and the friend who sent me to Acupuncture. I have truly found my purpose, and I plan to continue to expand my knowledge and my ability to help people for the rest of my life.

One thought on “Dr. Shark’s Story”